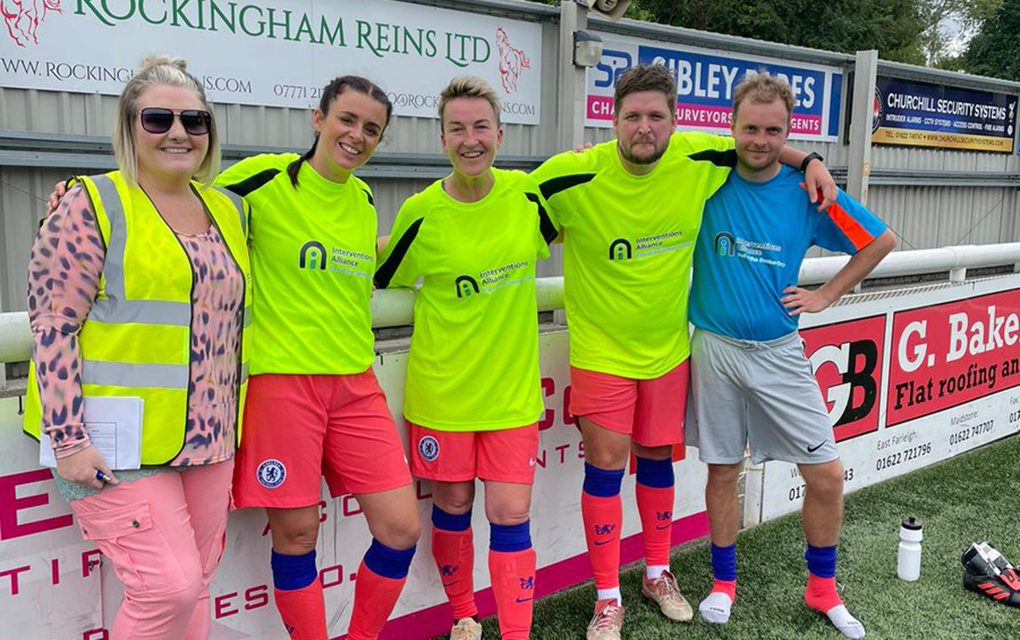 An auction and Charity Football Tournament at Maidstone United Football Club has raised £2280 for charities supporting victims of domestic abuse and childhood trauma.

The football tournament was designed to promote inclusivity for all, regardless of age, background, current circumstances, ability, and experience.

The tournament was organised by Interventions Alliance, which delivers a range of programmes, such as the Compulsive and Obsessive Behaviour Intervention (COBI), a targeted, tested, and proven intervention that attempts to break stalking perpetrators’ patterns of offending. Supporting victims and working to make communities safer is ultimately at the centre of their work.

A total of eight teams took part, made up of participants across the country and supported by staff from Interventions Alliance and the Seetec Group. They were also joined by special guest Tracey Crouch, MP for Chatham and Aylesford, who kicked off the tournament. The winners of the tournament, the Liverpool team, were awarded medals donated by Chelsea FC.

The auction following on from the Charity Football Tournament event saw colleagues from Interventions Alliance and Seetec bidding on items kindly donated by local and national partners. Some of the items on auction were 9th Generation iPads, wine-tasting at the Chapel Down vineyard in Tenterden, four adult Alton Towers tickets and much more.

Funds raised at the event are going to two chosen charities. Aurora New Dawn work directly with victims of domestic abuse, sexual violence, and stalking, and are based in Hampshire. Dandelion Time work to support and help children aged six to thirteen with complex emotional issues that have arisen due to some type of trauma. By focusing on the family unit, they create opportunities for new beginnings and improved relationships using nature as a central part of the therapeutic process. “It was wonderful to see people from across the Alliance coming together to spend a fun day playing football for charity. I am a great believer in the power of sport and think it can help provide focus and direction for almost anyone. Well done to all those who organised it.”

“Interventions Alliance is delighted to have hosted this event to raise funds for these important local charities. We are committed to working closely with our partners in the communities we serve, in our work to break the cycle of reoffending and help support victims.

“We are really grateful for all the support we’ve had from our partners for this fundraising event, and for all the hard work of our colleagues in organising the day.”